Scientists, engineers, and clinicians the world over credit Dr. James E. (Jim) West with changing the world of sound quality and connectivity. He, along with Dr. Gerhard Sessler, co-invented the foil electret microphone in 1962, while working at Bell Labs. Those of us who use hearing aids and cell phones benefit from his invention every single day. ADA would like to take an opportunity to recognize Dr. West and his important role as innovator as we celebrate Black History Month. 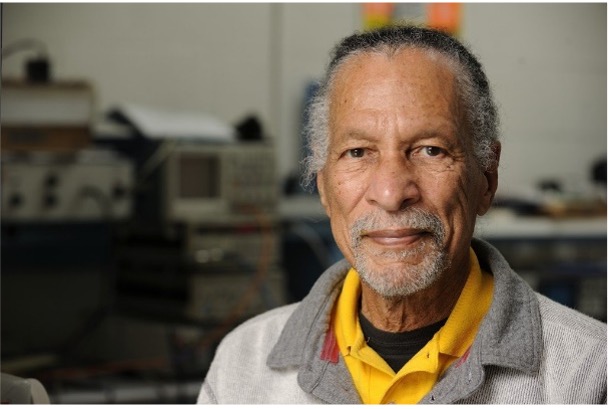 Some of Dr. West’s many awards and honors include serving as president of the Acoustical Society of America (ASA) in 1998-1999, being elected to membership in the National Academy of Engineering in 1998 and inducted into the National Inventors Hall of Fame in 1999. President George W. Bush presented Dr. West with the National Medal of Technology and Innovation in 2006, which is the nation’s highest honor for technological achievement.

Dr. West has made tremendous scientific contributions to industry and academia. What many people may not know is that he has made equally significant contributions to fight racism and improve diversity, equity, and inclusion over the course of his career. Citing racism as the single biggest obstacle he has faced throughout his career, Dr. West has consistently worked to establish programs to improve representation of women and underrepresented minorities in science, technology, engineering, and math (STEM). During his tenure at Bell Labs, he helped form a summer internship program, serving 3,000 university students each year. Dr. West was instrumental in expanding that program to include a corporate research fellowship program that paid for and mentored 600 women and underrepresented minorities to earn their Ph.D. degrees.

Dr. West founded the Association of Black Laboratories Employees (ABLE) at Bell Labs in 1970. In 2018, the Acoustical Society of America Minority Fellowship, established in 1992, was renamed the James E. West Fellowship. The fellowship supports minority students in their pursuit of graduate-level degrees in acoustics.

On February 10, 2021 Dr. West celebrated his 90th birthday. He continues in service as a professor and the diversity champion representing the Electrical and Computer Engineering Department at Johns Hopkins University. He also works with the Ingenuity Project to build enthusiasm for STEM among students in grades 6-12, in Baltimore, MD.

Learn more about Dr. West’s impact on audiology and the world.